The Problem With F. Scott Fitzgerald's 'Letter From Quarantine'

A note claiming to be from the author during the Spanish Influenza outbreak is being widely shared online, but there's one big problem with it. 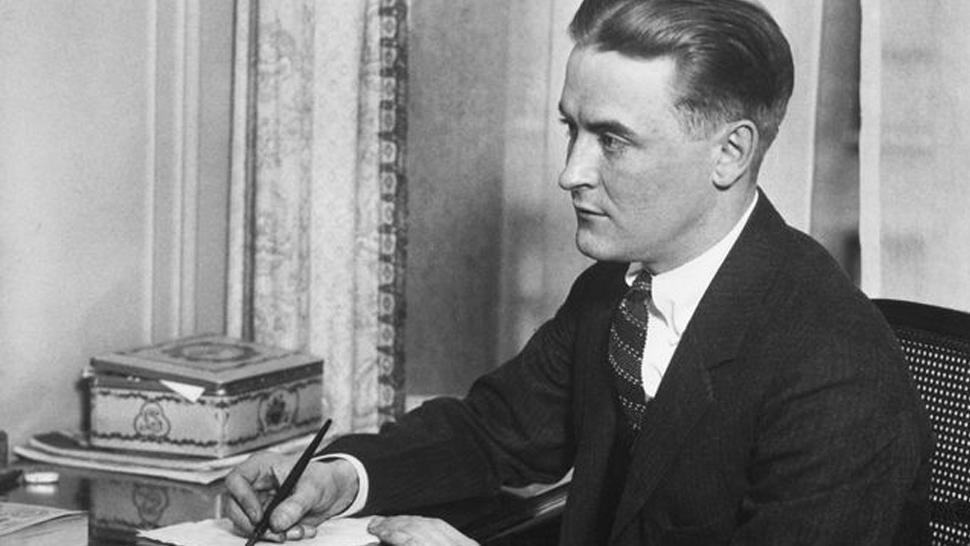 In and amongst the videos of lyrics to wash your hands to, Amy Adams singing 'Imagine' and pictures of the aisle where loo roll used to live, a letter from F. Scott Fitzgerald, written while he was under quarantine during the Spanish Influenza outbreak in 1920, is being shared on Instagram and Twitter.

Fitzgerald's words, now often featuring a GIF of a beating heart or a ray of sunshine over them, feel like a letter of hope sent a hundred years into the future. His dark humor as bars close and he stocks up on, "red wine, whiskey, rum, vermouth, absinthe, white wine, sherry, gin, and lord, if we need it, brandy", is the amusement we all need.

The problem is that it isn't written by Fitzgerald, nor was it penned in 1920. The parody letter in fact first appeared a week ago on the humor website McSweeney's, written by Nick Farriella. 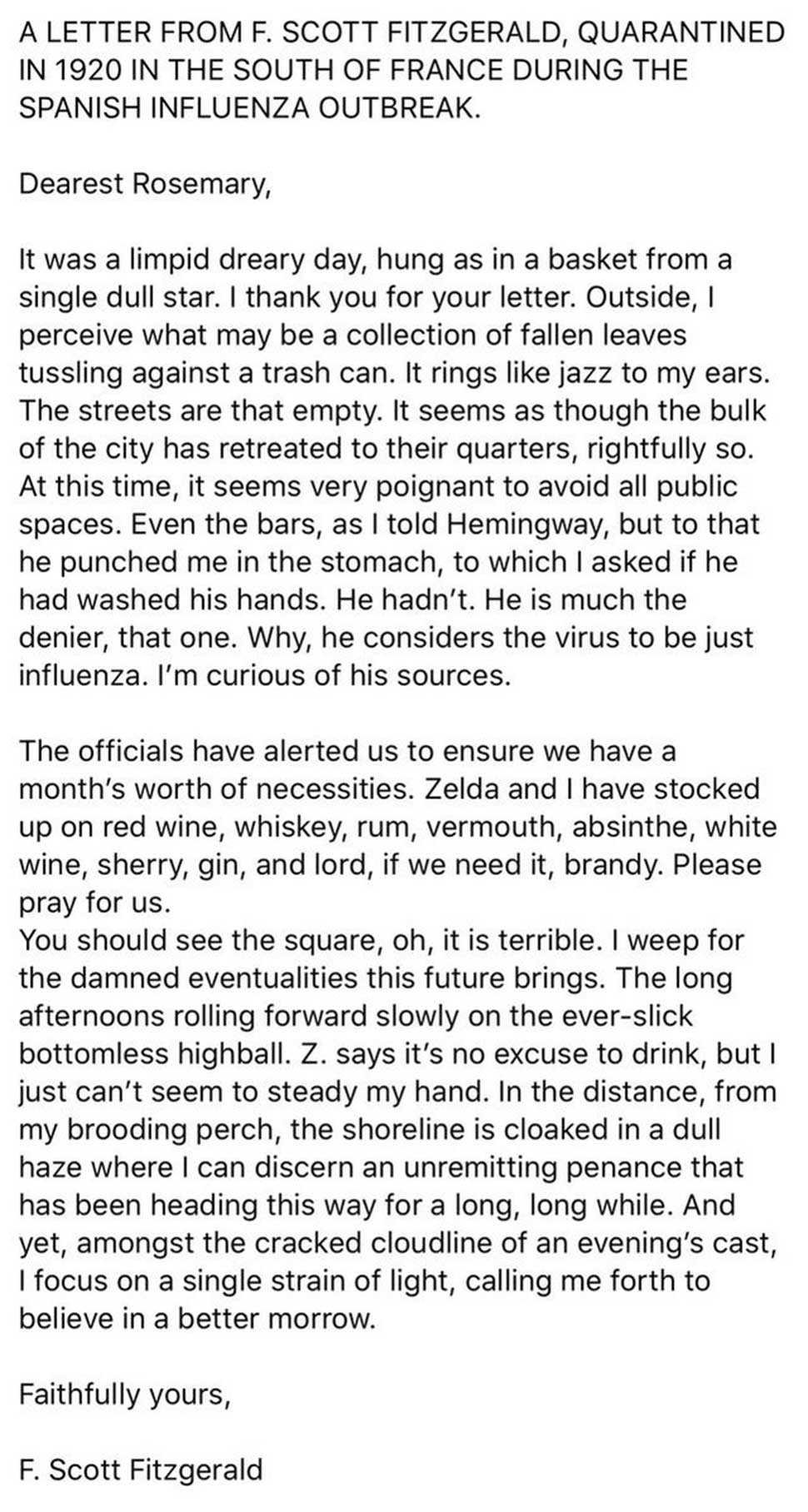 Taken out of context, it's easy to see how this letter could be believed as the real thing, with its writerly flourishes like the noise of "fallen leaves tussling against a trash can" ringing "like jazz to my ears". Between friends, the article began life as a sincere praising of how modern technology can connect us with those in the past who have already lived through strange times.

Historical inaccuracies aside, the fake letter going viral poses an interesting question about what makes fake news or misinformation harmful. Forwarded notes with untruths about borders closing or home remedy cures to the virus are obviously unhelpful in keeping people informed, but despite not being written by Fitzgerald, the letter can offer hope to people who want to believe there is something on the other side of the darkness.

"I think it speaks to the strangeness of the times," Farriella told Esquire. "Where many can't leave their homes, there's no sports going on, barely any distraction. So, for this parody to get some attention shows people's yearning for some answer from someone from the past, someone who's made it through something like this before. But even though it wasn't an actual letter from F. Scott Fitzgerald, I think the sentiment is still true, and we could all benefit from the way he lived his life, a relentless optimist."

A similar sentiment to Fitzgerald's supposed correspondence from 1920 is shared in a piece of writing by Kitty O'Meara titled 'In the time of the Pandemic'. It begins: "And the people stayed home. And they read books, and listened, and rested, and exercised, and made art, and played games, and learned new ways of being, and were still. And they listened more deeply. Some meditated, some prayed, some danced. Some met their shadows. And the people began to think differently."

The words from the blog post on The Daily Round have been widely shared on social media; mocked up in front of calming stock images of the ocean or decorated with a line about how we will get through this. It captured the kind of optimism people need right now, and after seeing it many people were asking Reddit or Twitter who the writer was. Some believed it was deceased Irish writer Kathleen O'Meara, perhaps hoping that the wisdom imparted in the writing comes from the past rather than being written in hope for the future.

Like with the fake Fitzgerald note it has also sparked a debate about authenticity, as Italian journalist Irene Vella has claimed it is a translation of her longer version of the same poem. Whatever its origin, these words are spreading like a global daisy chain of hope, promising things will be okay. Whether they are real or not feels almost besides the point.

Farriella's Fitzgerald letter is a fable people need to believe, and his "strain of light" a mantra that, like the real Fitzgerald's "green light at the end of Daisy's dock", provides hope for the future. Perhaps it doesn't matter if it comes from 2020 rather than 1920, as author Deepak Chopkra wrote when sharing O'Meara's words: "Source unknown... but worth sharing."