The Next Time You Dine Out, Skip the Beer or Wine and Try Cognac

Rémy Martin has a drink whether you need one pre-, during or post-meal. 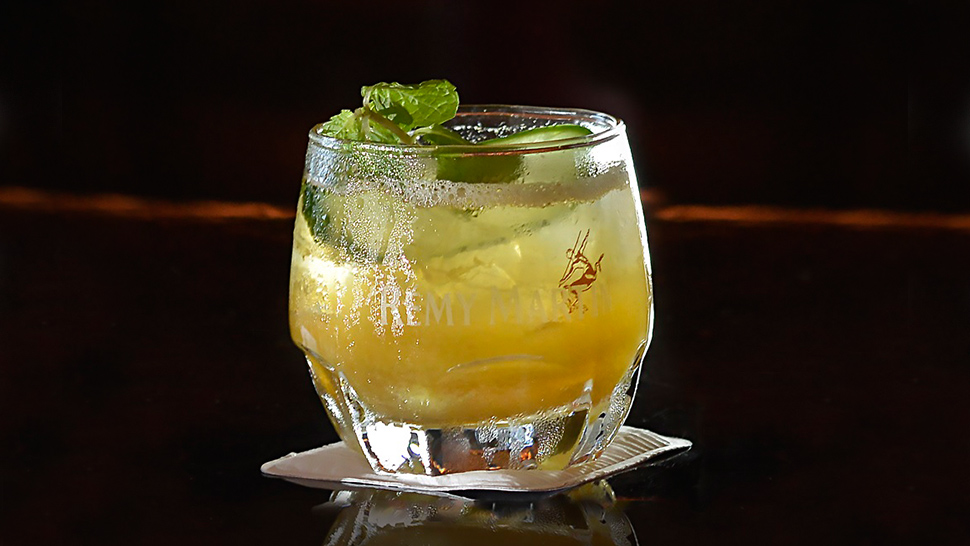 Most Filipinos still order either beer or wine as their default alcoholic drink when they go out to eat. More adventurous diners, however, are discovering that things like whisky or brandy aren’t just limited to aperitifs or post-dinner drinks and can also pair well with their steak or fish entrées.

This was the main takeway during an insightful master class featuring drinks by Rémy Martin one weekday evening at Chateau 1771 in Bonifacio Global City, Taguig. Brand advocate Kevin Charuel began the evening by serving a refreshing cocktail called the Rémy Mistral. Named after the strong, cold northwesterly wind that blows from southern France into the northern Mediterranean, the Rémy Mistral is comprised of cucumber syrup, fresh apple juice and Rémy Martin VSOP cognac.

From the Cognac region

“It’s not cognac if it’s not from Cognac,” Charuel said to explain the origins of the drink, which is a type of brandy made from special grapes in the wine-growing regions of Charente in France. Rémy Martin, in particular, is one of the world’s oldest cognac brands, having been founded nearly 300 years ago in 1724.

Charuel said that the brand sources its grapes from two of the most sought-after vineyards in the region: Grande Champagne and Petite Champagne, with the blends containing at least 50 percent Grand Champagne eaux-de-vie, or the initial liquid produced after fermentation and distillation.

What makes the grapes and the vineyards really special is the presence of soft and porous chalk soil, which allows the vines to grow freely. The soil also retains moisture during dey weather.

After a short introduction to the history and provenance of Rémy Martin, it was time to dive in and sample three of the brand’s main variants. Charuel suggested that, just like wine, we stop to appreciate the liquid’s color, scent and texture, before taking a sip and assessing its taste.

We started with Rémy Martin VSOP (Very Special Old Pale), an elegant and versatile drink that had unmistakable notes of vanilla on the nose. I won’t claim to be a cognac expert, but Charuel explained that the VSOP displays a well-balanced and structured character, as well as with ripe fruit qualities that make it perfect for cocktails, just like the Rémy Mistral.

It was suggested that the VSOP would drink well with sushi and sashimi, strong cheeses like Roquefort, and seafood, particularly oysters or scallops.

Next was the Rémy Martin Club, a variant first introduced in Asian markets, particularly China. I found it beguiling and intense, with a nutty scent and hints of cinnamon. It was no less forceful when it hit my tongue. Charuel recommended roasted almonds, smoked tuna, and ginger cake to go with a glass of Club.

Finally, we arrive at the XO. So named because it is Extra Old, it is the signature blend of the brand’s Cellar Master. On the nose, we got whiffs of fruit and perhaps even jasmine flowers. Swirling the liquid in my mouth, I got berries and oranges, plus hazelnts and cinnamon. Unlike the first two, this one slid smoothly down my throat. Undoubtedly it was my favorite of the three.

As for food, Charuel suggested having it with meats such as Duck served with a honey sauce and walnuts, Chinese barbecue pork char siew, and Peking duck; foie gras; crispy cereal prawn, and tempura with hints of gravy and ginger. Additionally, the XO would also go equally well with sweet desserts such as Earl Grey tea or Saffron ice cream, Fig tart and Vanilla ice cream, and any chocolate-flavored dessert.

Or, if you’re having it post-meal, sip it with mixed nuts (such as macadamia, cashew, walnut and raisins) on the side.

Whether you have it pre-, during, or post-meal, and whatever you have it with, clearly cognac is a versatile and elegant drink that could liven up the dining experience even further.

9 Most Beautiful Starbucks Reserves in the Philippines

This Poblacion Library Has a 100-Year-Old Bottle of Absinthe Worth P500,000
All Photos
Comments
View As List