"Ninety percent of everything is crap"-David Guerrero

The renowned ad man on the political powers of advertising and the resurrection of reading.

I didn’t really think advertising was a viable career. After studying an academic degree in International Relations for three years, I came to the realization that no one would know the things I just learned because they would be too difficult to explain and no one cared.

In the mid to late ‘80s there was a rise of political advertising in the UK. Margaret Thatcher’s election in 1979 is credited widely to Saatchi and Saatchi. We started seeing some progressive uses of advertising. It wasn’t purely a tool of the oppressors. That got me interested. Having been to a very liberal university, you think that advertising is the enemy. I came to the view that it is a neutral tool that can be used to communicate ideas for anything or anyone, that it wasn’t inherently bad.

I first came to the Philippines when I was 18. I spent some years here after leaving school. I had always known something about the country from my dad, so I wasn’t completely alien to it. There was no question that what was useful for me coming here was having an outside point of view. I had empathy for the country, but also the objectivity that comes with spending a lot of time overseas.

"As an approach, you need to be generous with what you write down, and not try to sit there for ages and write down one thing you think is brilliant"

Advertising is one of those things extremely difficult to do well. It can be done badly in an infinite number of ways. I’ve always felt we’ve got to do things better.

There were a lot of things I was able to do here that I wouldn’t have been able to do in other countries at a younger age. I was able to start my own agency at 37, became creative director at the age of 34

People regarded the industry differently. There was very much a service culture before, very much about the client always being right. There’s now the added sense that the market is what governs the conversation, and to be part of that conversation, you need to have ideas that are useful to people, actions that are useful to people, so that advertising and communications can earn their place in people’s lives.

What I prioritize is coaching people to push for better ideas for themselves. And to create an environment where great work can happen.

We discovered a little-known law. Ninety percent of everything is crap. If you apply that to ideas, it means you really need to come up with 100 ideas to get to 10 that are not crap. As an approach, you need to be generous with what you write down, and not try to sit there for ages and write down one thing you think is brilliant

The big winner last year was the repurposing of SIM cards for text books (by DM9 Jayme Syfu). Previously we won awards for a collaboration with Pepsi, making bottle lights. There’s been quite a lot of non-traditional work. It’s very Filipino. Ingenuity, seeing things that people with abundance don’t.

I’ve never felt [like quitting the industry]. I do hear people talk about this, they tend to be really successful people who have nothing left to prove, they’re already looking for some new world to conquer, or there are people who found it very difficult to get what they wanted to achieve. I don’t think I fall into that category, I fall in the category of still believing that I can do better and wanting to do better. It’s enough motivation to keep going.

Lately I’ve been concerned with how people don’t like to read. The translations of Noli and Fili in particular. They’re not books anyone is reading for pleasure and yet we have a statue of Rizal in every town. I’ve given some thought on how to bring him to life more. That’s one of the projects, making an app for Noli and Fili.

We started Manila Envelope in 2005. There have been highs and lows of this. The initial idea was to collect examples of where the Philippines is mentioned in global culture. The Miguel Syjuco issue, that was unfortunate. The time that it had taken the message of “Don’t let anyone reprint any of this” had been lost in the intervening years. That experience made me think I was probably overreaching myself, taking on a project like that.

My father gave me a sense of duty, that there are bigger causes than yourself that you need to believe in. His cause was his country. I think I’ve wanted to make some small contribution to add on to that, that was what he gave to me.

He continues to be an influence on me with his writing. I look at what he did, which was a huge amount in a short space of time, the biography of Rizal and the translations of Noli and Fili. A five-year period where he was intensely productive and did all these things he will be remembered for. I’m hoping my fiveyear period is still ahead of me.

About The Author
Kara Ortiga
View Other Articles From Kara

About The Author
Audrey N. Carpio
Features Editor, Esquire Philippines
View Other Articles From AUDREY
Get The Latest Updates From Esquire!
Subscribe to our newsletter!
Comments
Esquire Money 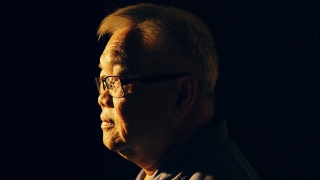