From Darna to Mogul: How Nanette Medved-Po Was Named Chairperson of the Po Family Council 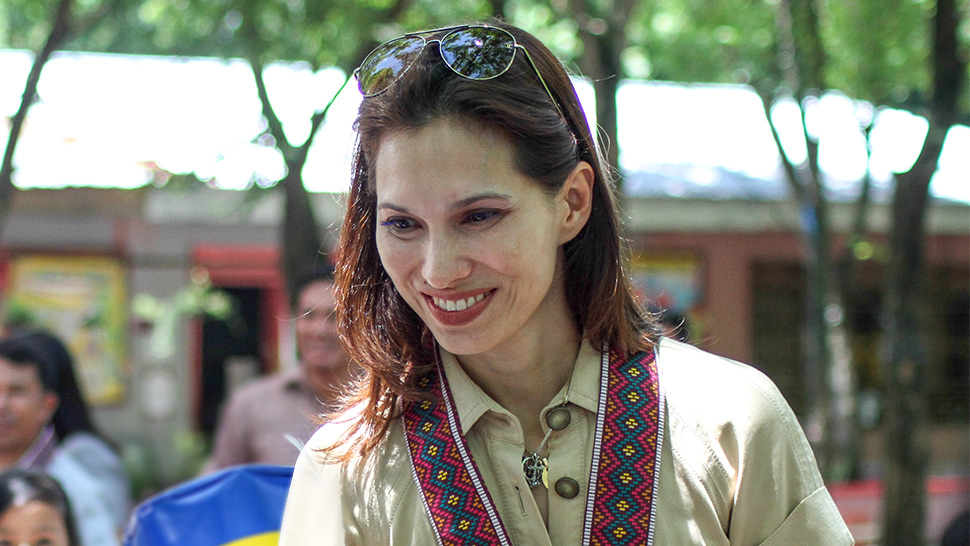 When Nanette Medved was recently called in to a meeting with members of her husband’s family, she had no idea she was going to be named the first chairperson of the Po family council.

It’s a delicate role for the celebrity with stunning Russian-Chinese good looks who married into the low-key family that Forbes lists as the 19th richest in the Philippines.

“I’m not quite sure what process it took but it was surprising. I did not anticipate that I would even be in the running for something like that,” she shared to Esquire after she and husband Christopher, or simply “Chris,” joined other featured power couples at a recent Shareholders' Association of the Philippines (SharePhil) gathering in Makati.

It was the first time the couple publicly shared that the conservative Po family has named an in-law, a woman at that, to take a lead role in a family that, according to the tradition of its Chinese ancestors, favors the males.

“I was a bit hesitant because I would be the first chair if ever, which means I would be setting the tone for the future positions. I was worried [because I was] being very careful on not making mistakes. But it’s such an unusual honor that I wouldn’t really want to mess it up.”

Nanette’s new role involves shaping the future of the family that once shunned her. How times have changed.

Chris left the fold and abandoned his role as heir apparent to the canned food business empire that his father founded and built. He is the third of the four sons of Ricardo Po Senior, founder of Century Pacific Group, the country’s largest canned tuna and sardines companies in the country.

The Pos are behind iconic brands such as Century Tuna, Argentina Corned Beef and 555 Sardines. Forbes estimated the family’s wealth, which also includes fast food chain Shakey's Pizza, and boutique real estate firm Arthaland, at $950 million as of 2019.

“I totally broke the mold on that one. I got flak for it also,” Chris shared when asked about Filipino-Chinese families’ expectations on how wives should be. “[We are a] very typical conservative business family who wants an in-law to be a non-person, and here she is, outstanding in her own way.”

He added: “The typical mindset is that [wives should] fly under the radar and shun publicity. But she’s in an industry where she has to be there in the limelight.” Medved starred in over two dozen films in the 1990s, next to the entertainment industry’s bad boys or iconic male stars, including the late presidential aspirant Fernando Poe Jr.

Isolation turned out to a blessing to the couple. They formed a bond like no other.

“She was helping me prepare my powerpoint presentations at 2am. She was there. She had my back, 100%,” Chris said of Nanette, recalling those years when it was just the two of them.

After earning his MBA from Harvard, as well as degrees in finance and systems engineering, Chris worked as a management consultant at McKinsey & Company in Hong Kong, led corporate planning at the Gokongwei family’s holding firm JG Summit, and was managing director for global firm Guggenheim Partners.

Nanette took a back seat and “worked for Chris Po, Inc.”

“When Chris and I met, I already had some semblance of success. I didn’t feel the itch to prove I can be successful. So when Chris launched his career after school, I felt a really strong need to support him,” Nanette shared.

Their complementary partnership would later pay off.

“I wanted Chris to really achieve his own success. When he did, we felt we could be very complementary, that he and I shared goals, and that each one being successful helped us both achieve those goals. And not necessarily compete and only one get there.”

Chris rejoined the family business in 2007 and was named president and CEO of their flagship firm.

The couple has a policy that they sustained over the years: 100 percent transparency. This applies even to Chris’ roles in the family business. Nanette is his sounding board.

“I have to make a lot of important decisions on strategy, in allocating capital, on people, even day-to-day decisions. I use her as my closest advisor,” said Chris. “I may not necessarily take the advice that she gives me, but she does give me her advice and I value it very much.”

“Of course, my brother or a close friend will sometimes say, 'This is just between the two of us.' Those highly confidential matters I cannot reveal or divulge. But outside of those, it’s 100 percent transparency. Almost everything that’s a big deal I would seek her for her advice.”

Because Nanette is in sync with all things family and business, Chris stressed that their policy of transparency “helps our marriage.”

Medved echoed this: “My husband is extremely transparent with the thought process that the family goes through. I had a full appreciation of what their values were, what their expectations were, and also my role and limitations. I would be careful not to overstep my boundaries.”

Nanette eventually returned to the limelight, but only to leverage on her celebrity status to promote her own advocacies. She launched a non-profit social enterprise, Generation Hope, which builds classrooms nationwide, with proceeds from the sales of its purified bottled water, “Hope in a Bottle.”

This time, Chris was Nanette’s sounding board. Nanette came up with a business model that essentially funnels product sales toward charity work, a tangible link between cause and effect that non-profit partners and consumers could easily understand.

Nanette’s stature as a philanthropist is later complemented by another enterprise. In 2019 she founded Plastic Credit Exchange or HOPEx, a non-profit that provides a platform for companies and consumers to offset their plastic footprints by linking them with entities that prevent plastic waste from ending in oceans, landfills and food chains.

Nanette was amply rewarded for her philanthropic work. Forbes named her among Asia’s Heroes of Philanthropy. The Philippine House of Representative recognised her for social work.

The Po family was in full blast with its efforts to ensure the business remains relevant and cutting edge. Chris was named executive chairman of the Century Pacific Group as the group further professionalizes the ranks and seeks for expansion opportunities outside of their canned food business. Chris’ brothers took on other key roles.

The Pos are also well aware of a truism: Most family businesses don’t survive beyond the 3rd generation due to differences that are not managed early on. Thus, after the corporate structure was formed, the family council was set up next.

The family council is separate from the family business, which has its own board of directors and management teams that operate under a corporate governance structure.

The Po family council is composed of the first and second generation family members—Po Senior and his wife, and his four sons and their wives—as well as those from the third generation who are of age. There are about a dozen grandchildren, including two from Chris and Nanette.

A family constitution guides the family council, which ensures harmonious relationship among the Po family members within the context of business. Retreats and family events are regularly organized. A full time staff for the family council, as well as family consultants, are in place to put together events that are purposeful in the smooth transition between and among the different generations.

“They put structures in place that provides a mechanism when there are issues. And in a family as large as theirs, it’s not going to be homogenous,” noted Nanette. “I think we are all learning together. This is also new for them. This is not a structure they had in the past.”

In the first place, why was Nanette chosen as the first family council chair? “It was competency based,” Chris proudly replied. “She has enough credibility within the family members, including the next generation. I think everybody now realizes that what she’s doing is a good example for the new generation.”

About The Author
Lala Rimando
View Other Articles From Lala
Get The Latest Updates From Esquire!
Subscribe to our newsletter!
Comments
Most Popular

Financial Adviser: 5 Business Lessons Every Startup Can Learn from the Founders of The Aivee Clinic